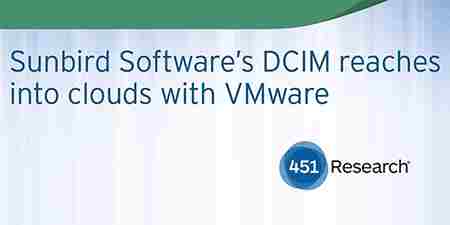 “Since spinning off from Raritan a few years ago, Sunbird has grown into a serious contender in the crowded DCIM space. By re-architecting and steadily expanding the functionality of its DCIM platform, Sunbird has attracted a solid customer base with some big-name clients.” – Rhonda Ascierto, 451 Research

We’re pleased to announce that 451 Research, an information technology industry analyst firm focused on the business of enterprise IT innovation within emerging technology segments, has published a report on Sunbird Software.

Titled “Sunbird Software’s DCIM reaches into clouds with VMware,” the report highlights Sunbird’s growth in the Data Center Infrastructure Management (DCIM) software industry. It also covers in detail the new features in Sunbird’s dcTrack® DCIM Operations software, including integration with VMware® via the VSphere SDK API for vCenter servers and ESX hosts, that raise Sunbird above the competition.

Additionally, dcTrack’s visualization capabilities further separate it from other data center software solution providers. According to the report, “A differentiator for Sunbird is its 3-D visualization of cabling, including end-to-end connections. A new feature called Layers uses Visio and AutoCAD to visualize cable trays (overhead and under floors) in the physical white space. The elevation specs of cable trays and cable measurements, as well as the physical location of trays and cables and the assets they are connected to, are included.”

Check out the videos below to see some of these features in action:

Finally, the report provides a competitive overview and a SWOT analysis for data center professionals looking to understand what makes Sunbird a strong solution provider in the DCIM space.

Ready to try out our solution for yourself? Take a test drive today.